“Anything that can go wrong, will go wrong.”  And, it’s corollary, “…at the most inopportune time”.

A few weeks ago, I was preparing a trio of Fox Valley Models GP60M/GP60B locomotives to use as a demonstration consist for the ProtoThrottle at Prototype Rails 2020, in Cocoa Beach, FL.  DecoderPro was being used to configure and tune the Tsunami2 decoders in the locomotives, via my NCE PowerCab and USB interface.  In the winter, Colorado is dry.  No, I mean very dry.  We joke that the relative humidity goes negative here.  While dry can be nice at times, one of the big downsides, especially when working with electronics, is static electricity.

Between programming locomotives, walking between my workbench and the test track, I generated a wee bit of static charge on myself.  When sitting down and touching my laptop (yes, without proper static precautions – shame on me) a large static discharge occurred – SNAP!  Fortunately my laptop was just fine, but suddenly DecoderPro couldn’t communicate with the NCE system anymore.  Uh oh…

Upon further investigation, I discovered that the USB interface chip on the NCE USB interface was getting warm.  Hmmm.  Not good.  Unplug.  Replug.  Same thing.  No communication and a really hot piece of silicon.  Yup, I zapped the CP2102 IC on the interface board.  Given this was less than a week before I left for Cocoa Beach, I was now in a bind.  With no other convenient way to program the locomotives, I needed to get the interface working.

Amazon Prime was not much help.  Yes, I could get a new NCE interface, but it would take several days, including over the all important weekend when I was planning to finish this little programming project.  Any local ones available?  Not that I could find.  So… introducing the Franken-adapter (as in Frankenstein, not the former senator from Minnesota): 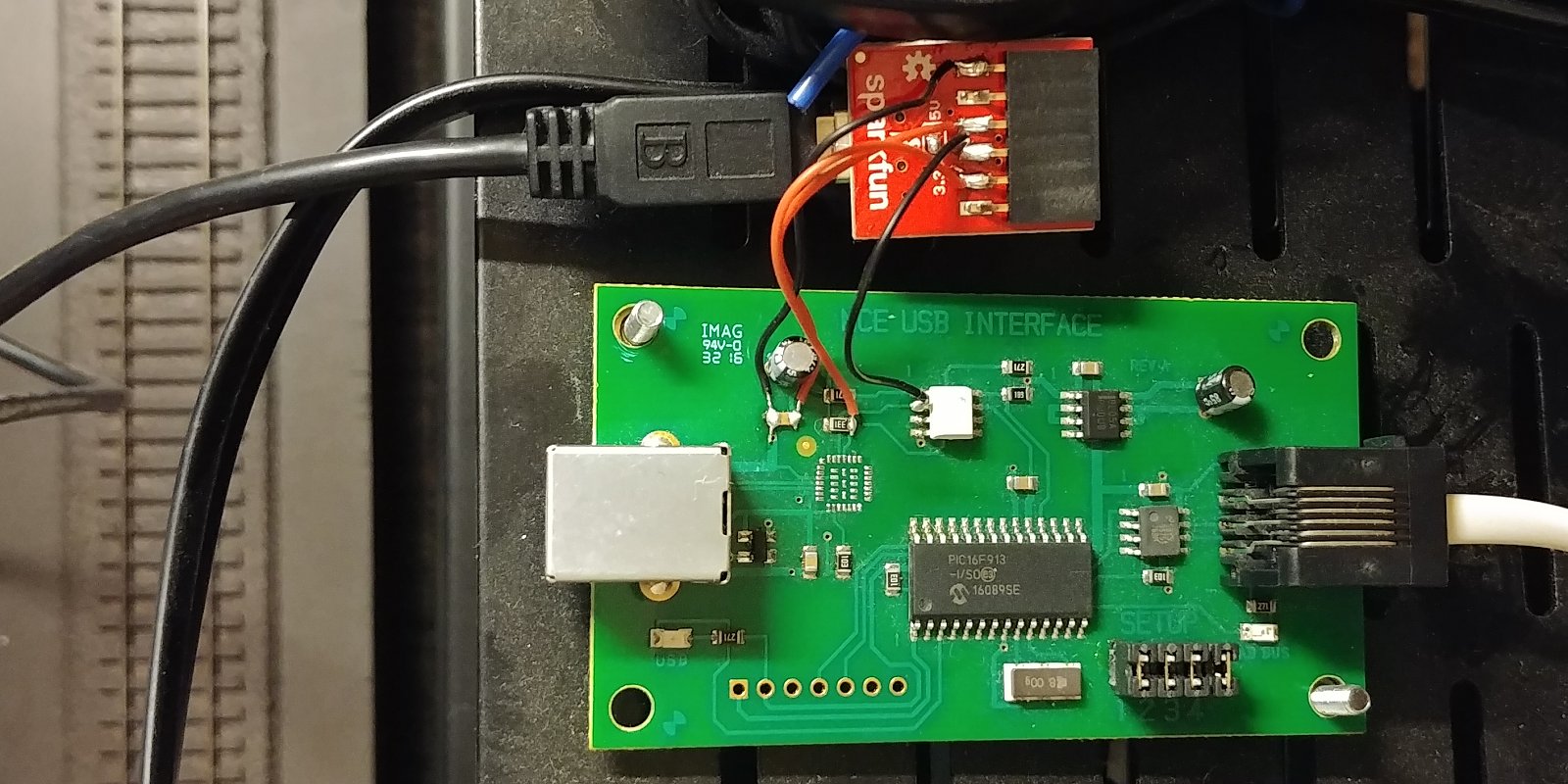 Fortunately, I happened to have a spare SparkFun FTDI Basic board.  Reconfiguring it for 3.3V (cut a trace, solder a jumper) and adding some wires, I was able to hack it into the NCE USB board.  The now damaged CP2102 IC was removed, thanks to the hot air reflow machine.  A little detective work using the CP2102 datasheet indicated how it was connected to the optoisolator and how to wire the FTDI board in its place.  (Note to self: don’t forget to also wire 3.3V to the board to power the LED inside the optoisolator – electronics are oddly picky about having power.)

Once all the connections were made (and after discovering my lack of 3.3V power the first time), the board was plugged in to both the NCE system and the laptop.  Lo and behold, it worked!  We were back in business.  Locomotives programmed and Prototype Rails was a great success!  Look for a writeup on the programming of the locomotives and their use with the ProtoThrottle in an upcoming article.