By default, the GCP/2 comes with either photocell sensors (the $47.95 GCP/2 version) or infrared (the $59.95 GCP/2-IR), and can also be purchased without sensors for $39.95.   Photocell detectors are always going to need room light to function reliably and are finicky, requiring you to manually set sensitivity with the onboard potentiometers, so they’re never a great choice.   If you go with the GCP/2 infrared sensors, each sensor set requires mounting a pair of devices – an LED and a phototransistor – and making sure they stay in alignment.     Update: As Chuck points out below, the GCP/2 uses an updated modulated IR scheme.   I was remiss in not actually checking it with a scope before assuming it was LR’s older constant IR sensing scheme.  While I haven’t bothered to work out all the details, it appears to be a pulse of either 0.5ms and 1.25ms or so  going out at ~15Hz or so, which means it can probably use sensed pulse width to do pretty solid noise rejection.  Nice upgrade!

The TrainSpotter makes for an easy upgrade.  Not only do they mount with a single hole and no alignment issues, but because of their unique modulated infrared signal, they’re immune to interference from room lights or other devices.  Plus, Logic Rail brings out all the signals we need.   Just mount each TrainSpotter in the same place you would mount the normal GCP/2 sensor, connect the red wire to the +5V terminal, the black wire to the GND terminal, and the white wire into WF / WN / EN / EF as appropriate based on where the sensor is located.  I’ve circled the appropriate connections in green in the picture.  You will also need to set the dip switches so that “SEN TYPE” is OFF (towards the text label) and “SEN POL” is ON (away from the text label). 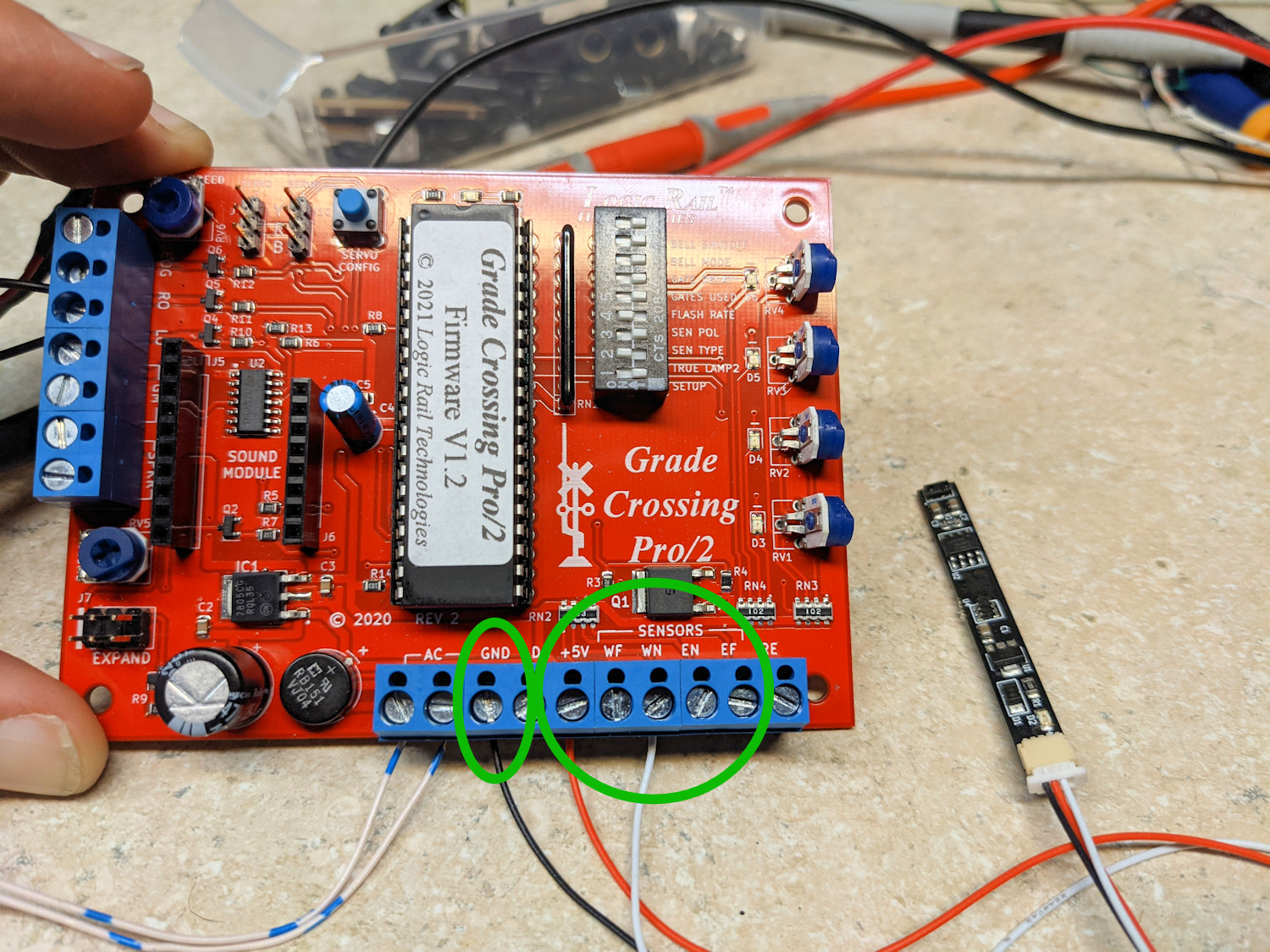 Logic Rail offers an assortment of bells that you can plug directly into the board.  However, you might find that you like ours better, since we offer a broader range of exact prototype recordings and offer an integrated speaker.  So if you want to hook up a SoundBytes bell, here’s what it’s going to take.

The bell is a bit trickier, as unlike the detection inputs, Logic Rail didn’t bring out all the signals we need to make it work.  Connect the red wire to the +5V terminal and the black wire to the GND terminal.  Here’s the part where it gets tricky.  You need to connect the white wire into pin 6 of the expansion header.  I just used a spare 2-pin cable I had lying around, and hacked one wire/pin out of the connector.  These 0.1″ connectors are frequently called “Dupont” connectors for reasons that elude me, but they’re easy and cheap to buy on Amazon.  You could also solder to the pin, but that seems messy if you might want to eventually add a second track module or something that Logic Rail intended you to plug in there.   Update:  Chuck from Logic Rail confirms that they’ll also sell you just the 6-pin cable to plug into the socket.  The cable is available from their online store. 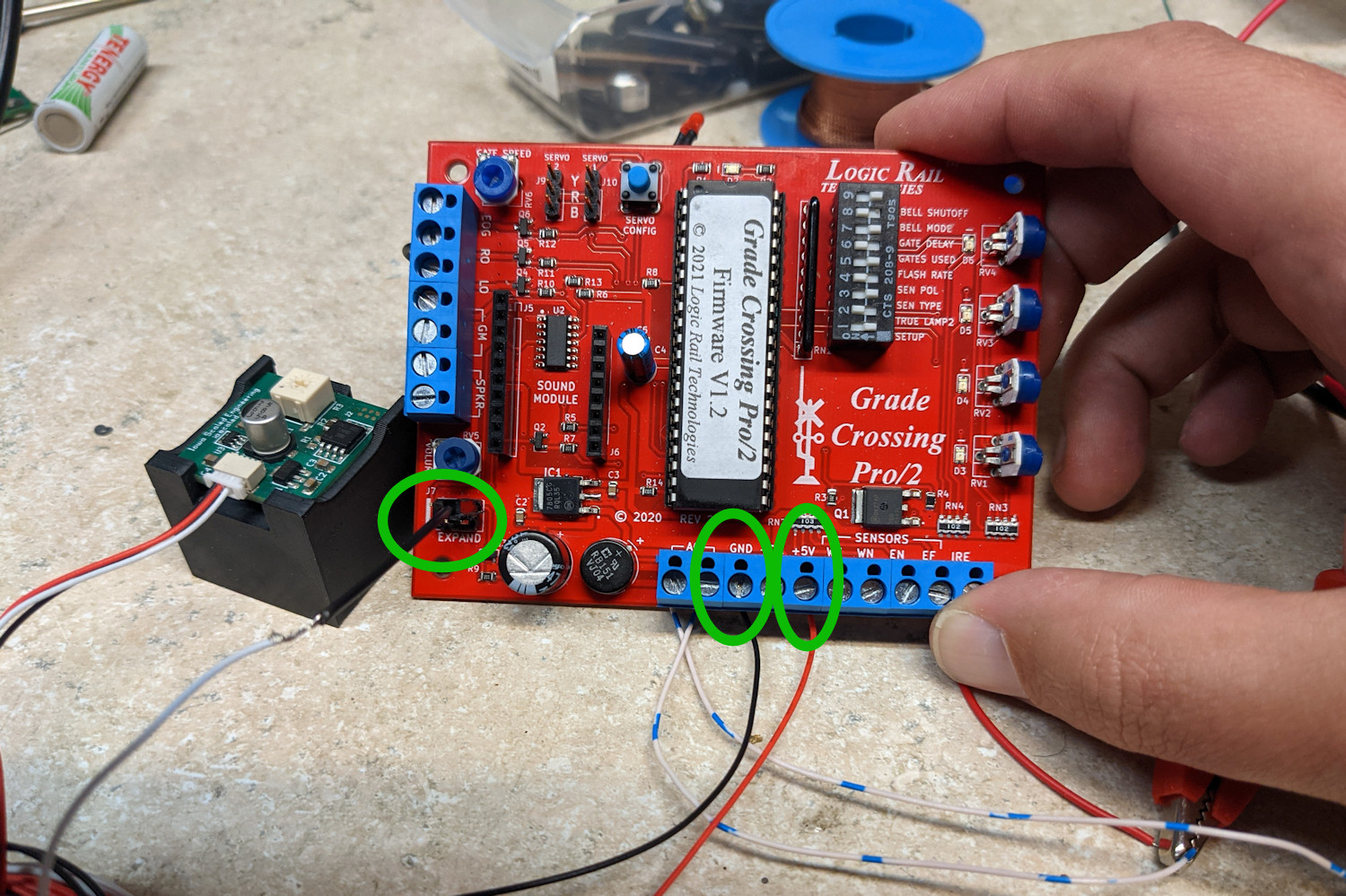 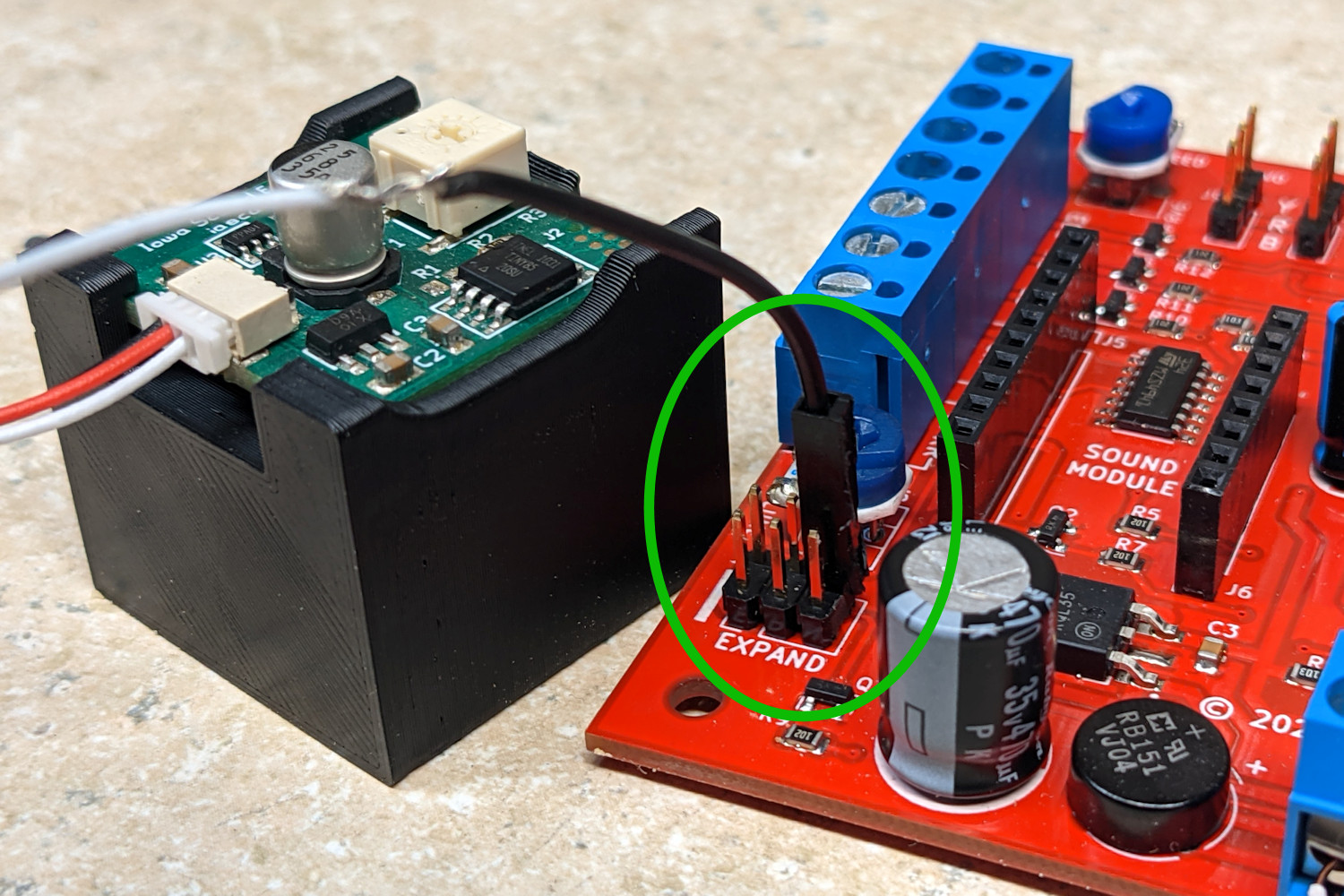 Option B: If you want to cheat a bit and you’re not using the GCP/2’s EOG (the end of gate – aka, the constant on light – terminal), you can connect the white wire there as well.  If you are using it to drive LEDs or anything else, don’t do this – you’ll fry up the SoundBytes module like an egg on a Death Valley sidewalk in August.  But if you’re not using it for anything else, it’s perfectly safe.  The downside is that the bell will ring any time the gate lights are on, meaning any bell options set on the board will no longer apply. 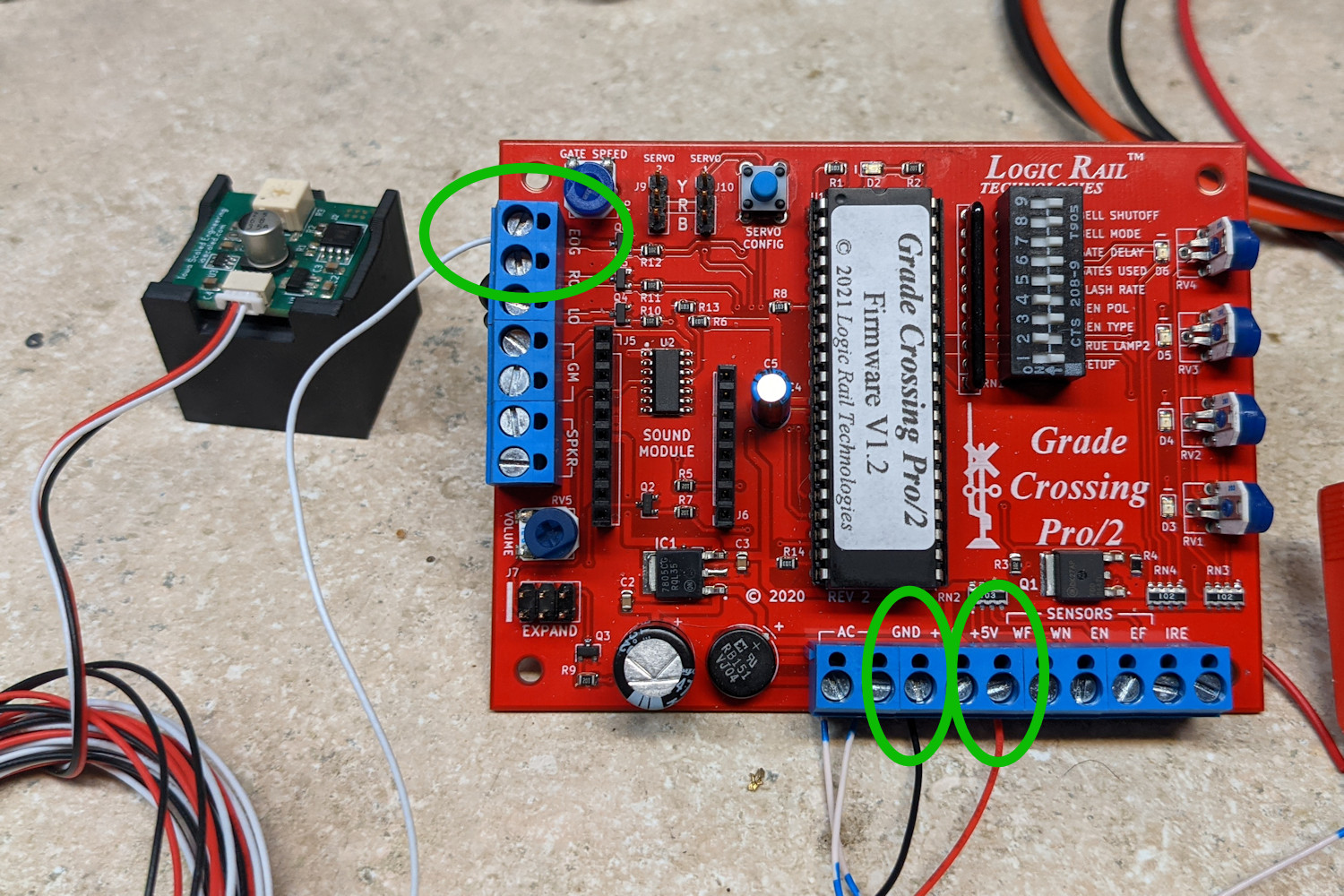 The MRX3 is Azatrax’s latest solution in the grade crossing control space.

Unfortunately, it’s not easy to upgrade the MRX3 to TrainSpotter detectors.  The EB and WB inputs that can be used for current-based detectors don’t have the same delayed timeouts as are built into the onboard optical detectors, so they release the crossing as soon as the IR detector no longer senses something.  The onboard detectors use a very clever (no, seriously – *very* awesomely clever) mechanism for determining which IR sensors are attached and how they’re configured.  Unfortunately it precludes any easy way to connect TrainSpotters – sorry.  On the other hand, Azatrax’s mechanism for detection works quite well.

Fortunately attaching a SoundBytes bell is actually easier on the MRX3 than it is on the GCP/2, at least assuming you’re powering the board with DC and not AC power.  (If you’re powering it with AC, you’re a bit out of luck.)  And by DC I definitely don’t mean an old crappy power pack.  All you need to do is connect the black wire from the SoundBytes to the negative power supply line and the red wire to the positive power supply line coming into the power terminals (P1/P2).  Then connect a line from the negative power supply to the CB terminal on the MRX3, and connect the white wire from the SoundBytes to LB or SB as appropriate for the bell behaviour you want. 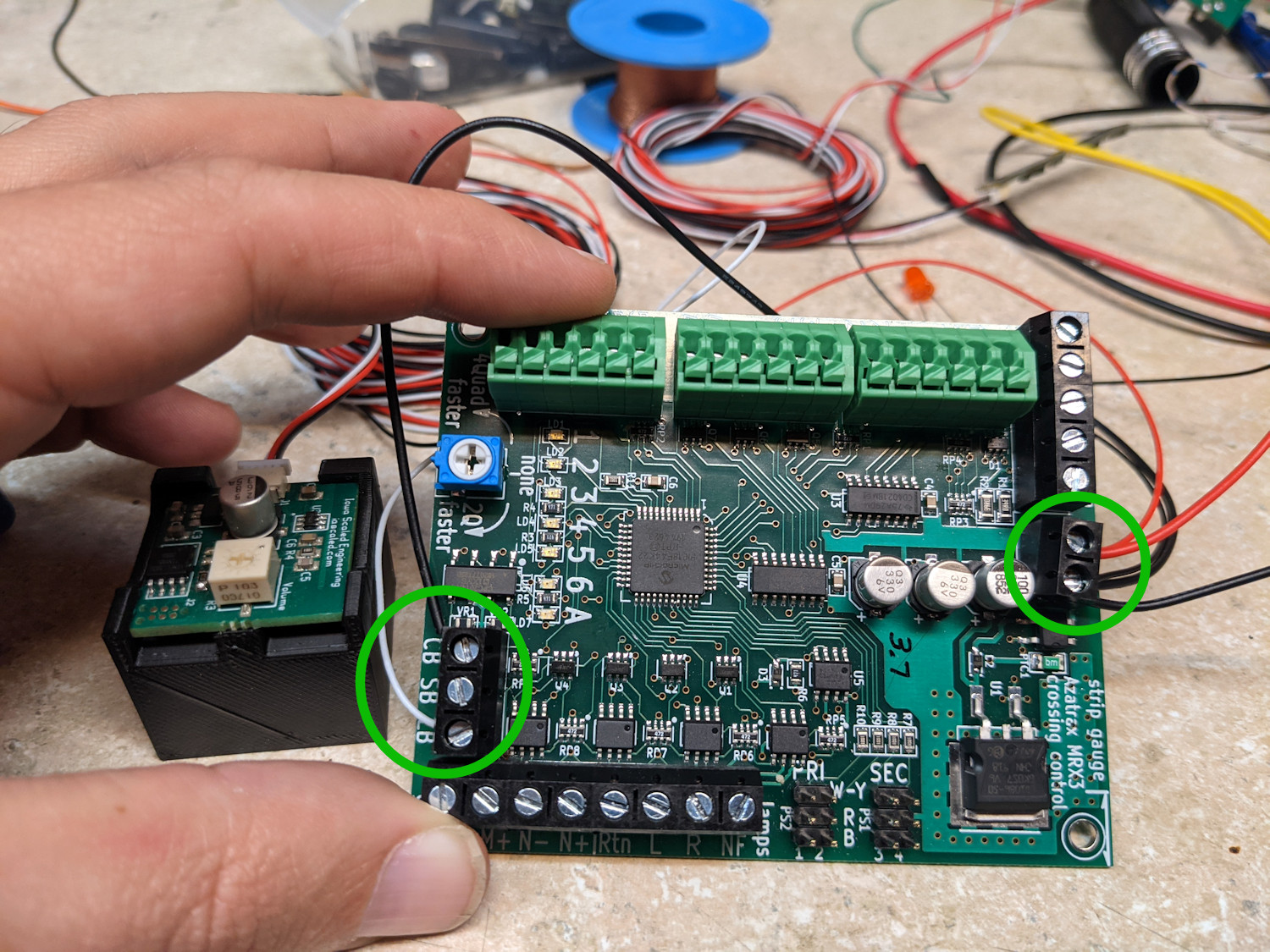 The Lamplighter Flasher and Integrated Railroad Crossing from Dwarvin can easily be used with our TrainSpotter and SoundBytes crossing bell modules.  It already comes with them!  Dwarvin supplies our reliable IR detectors and simple bell modules as accessories for their easy-to-use fiber-based railroad crossing solution.

On eBay or other various purveyors of the finest in cheap Chinese tech, you’ll often find somewhat crude grade crossing signals accompanied by a small PCB with three 2-position terminal blocks and a gold can with a tiny adjustment screw in the middle that flashes the lights.   These things don’t come with any sensors or bells, so in essence we’re not so much doing an upgrade as adding features they don’t even have.   But, a number of modelers seem to gravitate to them since they’re cheap, and for the most part they work.  So I’ll show you how to make them work.

The first thing to know is that they’re really dumb modules – there’s no microcontroller at all.  It’s just a blinker.  So any of the advanced “start flashing on approach, time out if it doesn’t hit the island circuit, etc.” behaviour that the GCP/2 and MRX3 have isn’t present.  So, that means to make them work effectively, we have to add as many IR sensors as it takes to make sure we have good coverage over all the places where we want a train to trigger the lights.   On a small branchline with signals triggered just before the train enters the crossing, one on each side might be sufficient.  If you’re modeling higher speed track, you’re probably going to want more sensors further out from the crossing with some significant turn-off delay.

The TrainSpotter normally turns back its “not detecting” state about 0.1 seconds after the train passes off the sensor.  This is known as the “turn off delay”, and it’s somewhat adjustable.   On the standard TrainSpotters (normal and right angle), there’s two metal pads on the back marked “JP1”.  If you bridge these with a dollop of solder, it increases the turn-off delay to 5 seconds from 0.1s.  If you’re using the 2-piece TrainSpotter then there’s a small potentiometer that allows you to dial in the turn-off delay you want, from 0.1s all the way to 25s.

Here’s how to connect it all up – the LEDs hanging off the board are just my way of testing that the LED outputs are working.  Also, please actually solder and insulate your black wire ground connection, as opposed to just twisting it together and leaving it flapping around to short out, as I did in this example:

Adding a bell to this setup is incredibly simple.  Connect the red wire from the bell in with the rest of the red wires at the positive power connection.  Connect the white and black wires from the SoundBytes module together, and hook them to the white wires coming off the TrainSpotters.

Wait, what’s this in the right corner?  We haven’t covered that one yet, and it’s got an ISE logo on it.  Could it be a simple crossing module that comes with TrainSpotters and a SoundBytes bell that plugs right in?  Stay tuned…