A common question about the ProtoThrottle is how to configure the headlights on a locomotive to work best with the throttle.  The ProtoThrottle has two prototypical headlight switches, one for the front, the other for the rear.

Each switch can independently set the front and rear lights to one of four modes:

These steps are discussed in detail below, including examples for each decoder type.  Some decoders have fewer configuration options and, as a consequence, cannot support all the modes that the ProtoThrottle allows.  If your decoder type is not listed, have no fear, it is very likely similar to one of those below.  And please let us know if you come up with a configuration for a decoder type not listed, or a better way of configuring one of the listed decoders.

While not sound equipped, the DCC decoders from NCE can still be configured for the ProtoThrottle.  The following instructions are based on the 6-pin N12NEM decoder, but other models should be similar. 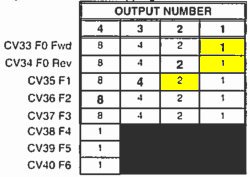 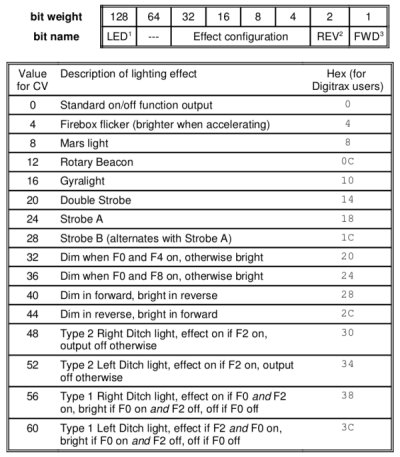 For standard on/off headlights with no dimming, from the table, we start with a CV value of 0.  Since we are using LEDs, we want the LED bit set (+128).  To eliminate directionality, set the REV and FWD bits to 0.  Therefore, program both CV120 and CV121 to a value of 128.  To add dimming capability, continue reading…

Fortunately, the NCE decoder provides two functions (F4 and F8) that can activate the dimmer.  This allows the front and rear headlights to be dimmed independent from each other and achieve full ProtoThrottle compatibility.  Referring to the effects configuration table above, the values for the effects configuration CVs are 32 and 36.  We are going to use F4 to dim the front headlight and F8 to dim the rear headlight.  The values for CV120 and CV121 are now:

Since I’m using an N-scale Fox Valley Models ES44C4 and the ditch lights are lit by the same light tube as the headlights, I’m limited by the hardware and cannot do this.  However, even on the N12NEM decoder, outputs 3 and 4 also available as solder pads.  Someday I’ll wire them up to LEDs, and cut the light tubes going to the ditch lights, so I can independently control the ditch lights.  But that’s a project for another day… 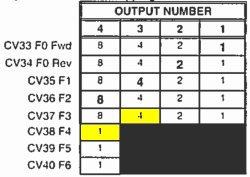 Now that we have the locomotive configured properly, the final step is to tell the ProtoThrottle how to control those lights.  Start by going to the CONFIG FUNC menu.  We are going to change eight settings, four for the front headlight and four for the rear:

In this example, I am using DecoderPro, which is part of JMRI, to configure a TCS WOWDiesel decoder.  By default the headlights (both front and rear) as assigned to F0, but are directional – turning on automatically in the direction the locomotive is headed.  We will start by assigning the front headlight to function F0 and the rear headlight to function F3.  Using the Function Map tab in DecoderPro, assign both F0 inputs to output wire 1 (white, front headlight) and the F3 input to output wire 2 (yellow, rear headlight):

On the Lights tab, change the White Wire Timing and Yellow Wire Timing to “Function on both directions”.  This eliminates the automatic directionality of the lights so that they follow what the ProtoThrottle light switches are telling them to do, not the locomotive’s direction of travel.  However, we’re not quite done yet…

The TCS decoder has a concept of light mode vs. sound mode.  This lets you use the same function keys to control both lights and sounds, depending on which mode the decoder is in at any given moment.  However, for the ProtoThrottle, we need the light functions to work in either mode.  Therefore, we need to configure the functions associated with the lights to be “dual mode”.  We also need to remove the sounds associated with them so the sounds don’t activate when we turn the headlights on or off!  On the Sound Function tab in DecoderPro, make sure the “Dual function” checkboxes for both F0 and F3 are checked:

On the same tab, set the Function 0 Sound and Function 3 Sound to “None”.  Now the front and rear headlights are selectable, independent from the direction of travel, using unique functions F0 and F3.

To make the lights dimmable, we need to set the effect for the outputs to “Rule 17”.  By default, this makes them button dimmable – dimmed when a particular function is activated.  On the Lights tab in DecoderPro, select Rule 17 in the White Wire Effect and Yellow Wire Effect boxes:

As before, we need the dimmer function (F4) to be active in both modes of operation and have no sound assigned to it.  Using the Sound Function tab, check the checkbox next to “Dual function F4” and set the Function 4 Sound to “None”.

Finally, the brightness of the dim setting can be adjusted.  Back on the Lights tab, change the “Constant Dim 1 Brightness” until you have the dim setting you like.  In this case, a value of 15 was found to be good: 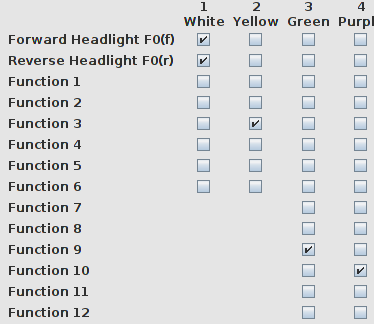 On the Lights tab, make sure the Green and Purple Wire Effects are set to “Constant bright light” and the Timing settings are “Function on both directions”.

Remove the sounds associated with F9 and F10 using the Sound Function tab (set them to “None”) and check the Dual function checkboxes for F9 and F10: 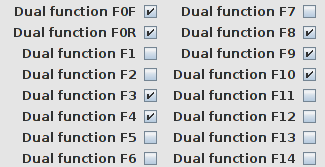 The front headlight is CV1.257 and the rear headlight is CV1.258.  Set CV1.257 to a value of 0 (F0) and CV1.258 to a value of 19 (F19).  This gives the front and rear headlights independent controls.  To make them non-directional, the direction enable CVs must also be set.  CV57 controls which functions are enabled in the forward direction and CV58 does the same for the reverse direction.

Bits BL (value = 2) and HL (value = 1) should both be set in CV57 and CV58.  This allows the front and rear headlights to be active in both the forward and reverse directions, allowing the functions assigned to them (F0 and F19) to be the only things that control whether the lights are on or off.

The Tsunami2 decoder has a single dimmer, by default assigned to function F7.  By selecting the appropriate Hyperlight effect for the headlights, the dimmer can be used to dim the light.  CV49 is used to configure the front headlight effect whereas CV50 configures the rear headlight effect.  A value of 1 selects a standard dimmable headlight which immediately transitions to the new brightness.  A value of 15 selects a Dyno-Light with soft fading between brightness levels.  If using LED bulbs, add 128 to those values.

The above restriction does not apply in a multiple unit consist.  In that case, since the front and rear headlights are controlled by separate decoders, they can be independently dimmed.  Just configure the opposite headlight to always be off.

The example below uses the free LokProgrammer software from ESU to set up the decoder configuration.  Even if you do not have a LokProgrammer, you can still use the free software to generate your configuration, then export the list of CVs for manual programming.  Either use Tools -> Export CV list… to get a list of all the CV values or Tools -> Show changed CVs… to see just those CVs that were changed.

The headlights for this Intermountain GP10 came programmed as automatically directional, controlled by function F0:

To remove the directionality from the headlights, configure them as follows (go to the Function Mapping tab of the LokProgrammer software):

This makes F0 control the front headlight and F5 control the rear headlight.  Notice that the “Forward” and “Reverse” conditions were removed.  This way the light obeys only the function, regardless of the direction the locomotive is moving.  F5 was chosen somewhat arbitrarily here – you can use any unused function.

In the Loksound decoder, as with many other decoders, there is only one function-activated dimmer.  This can be found under the Logical Function column.  However, we’re not going to use that here as it complicates getting the headlights independently dimmable (it can be done, but it’s not as clean).  What we’re going to do instead is to use the two “pseudo-outputs” for each of the headlights.  If you look closely, you’ll notice the AUX2 output has 2 versions available: AUX2 [1] and AUX2 [2].

Internal to the decoder, these are treated as separate function outputs.  However, they control the same physical output on the decoder.  Effectively, this gives us two independent paths in which to turn on the AUX2 output.  The Rear Light output has the same thing.  One path will be used for a full brightness headlight while the other will be used for a dim headlight.  We are going to use F3 to enable the dim front headlight and F6 to enable the dim rear headlight (again, the function numbers are somewhat arbitrary).

This alone, however, won’t give you dim headlights when F3 and/or F6 are activated.  We also need to configure the outputs themselves.  This is done in the Function Outputs tab.  Select the AUX [2] output (the one assigned to F3 above) and adjust its brightness to a lower level.  Some experimentation may be needed to achieve the brightness level you want for a dim headlight.  Do the same for the Rear Light [2] output (the one assigned to F6 above). 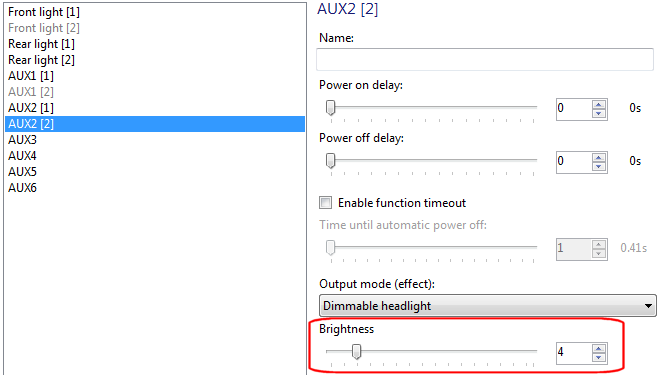 For the output mode on all four outputs (AUX2 [1], AUX2 [2], Rear Light [1], Rear Light [2]) you’ll want to select Dimmable Headlight, not Dimmable Headlight (Fade In/Out).  Fading doesn’t work well when transitioning between the two output (e.g. AUX2[1] to AUX2[2]) because the light fades all the way to off before fading back up to the new brightness level.  This causes it to blink.  With the Dimmable Headlight setting (no fading) you lose the fade effect, but don’t have to put up with the blink.  This might be a matter of personal opinion, so feel free to experiment.

The final step is to tell the ProtoThrottle how to control the lights.  Start by going to the CONFIG FUNC menu.  We are going to change eight settings, four for the front headlight and four for the rear: