I’d like to introduce the new ISE ATOM – the Advanced Train Occupancy Monitor.  It’s the next generation of our old CKT-BD1 DCC Block Detector.  Many of you have asked when it was coming back, and judging by the people who have already ordered a good number of them as soon as I got the store updated, there’s clearly demand out there.

Some of its key features include:

Probably the single biggest feature is the pushbutton sensitivity adjustment.  The detectors come from calibrated to sense a 1 milliamp load – about what you’d get from a 10k resistor across the rails.  For most users, that’s probably going to be great and nothing else is needed.  Just install and get on with railroading.

However, there’s going to be some folks out there who have mildly conductive ballast that leaks a little bit of current, particularly when it gets humid.  For most detectors, there’s either no easy way to adjust them, or it involves twiddling some little potentiometer back and forth with a screwdriver.  With ours, just make sure the block is truly empty and then hold the adjustment button down until the orange light comes on solid, release, and wait a few seconds for it to digitally adjust out up to 10mA leakage current.   We think you’ll find it a lot simpler and quicker than trying to line up a tiny screwdriver under the layout, on your back, in the dark, but like I said, most of you won’t need it at all.

Wiring couldn’t be simpler.  Just pass one side of the DCC feeders through the current transformer, apply 5 to 24 volts of clean DC power to the terminal blocks, and you have two open-collector outputs – one active when something is detected, and one active when nothing is detected.  Indicator LEDs on the ATOM clearly show you that it’s getting power, and if something is being detected!  If you’d rather use plug-in cables to wire them, they’re compatible with our standard four-wire cables that we use on the TrainSpotter line of sensors, and those cables can be ordered separately.

The standard ATOM (still part number CKT-BD1) is priced at $19 in single quantities, or $18 in 6+ and $17 in 12+.  Nobody doing block detection wants just one, so take advantage of quantity discounts! 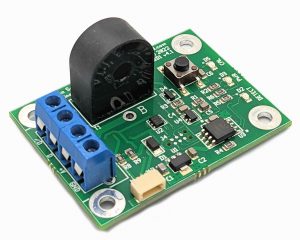 If you’re a C/MRI user, we offer the CKT-BD1-CMRI, which includes a C/MRI compatible connector on the board instead of the terminal blocks, allowing it to plug in just like the Dr. Chubb’s DCCOD.  It’s slightly more expensive because we have to solder that little wire through the CT and because the connector adds some cost, but if you’ve already got the motherboards installed, it makes wiring much easier and cleaner. 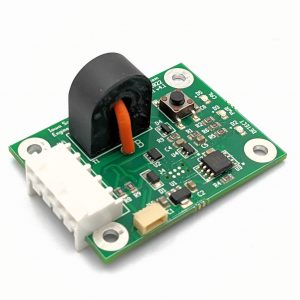 After the new year, I’m going to be putting together a DCC block detector roundup and comparison, similar to what I did with IR sensors a few years ago, highlighting the differences and similarities between the ATOM and its many competitors.  Stay tuned.

I’d be willing to bet that I get at least an email every month asking when our old CKT-BD1 block detectors will be back.  Our answer for the last couple years has been “we’re working on it”, but the reality is that’s a combination of higher priority projects, a failed intermediate design, supply chain issues, more procrastination, more supply chain issues,and a final round of procrastination for good measure.  But if you want to know the longer version of what it’s taken to get here, grab a pint and have a seat, I’m about to regale you with the Ballad of the BD1.

(Because with my voice it’s still considered a crime against humanity in most jurisdictions, I’ll avoid singing it to you despite calling it a Ballad.)

The initial replacement design (v3) was done right as COVID hit in 2020, and needless to say, it wasn’t high on the list of priorities when it looked like the world was about to go full Mad Max over the last rolls of toilet paper at the grocery store.  That turned out to be okay, because in testing the design on my own layout, it proved to be too sensitive to tolerances on some of the components and nearly impossible to produce reliably in quantity.  Back to the drawing board…

Over the next year, I swear every conversation with Michael started out with “I hate to be the bearer of bad news, but guess what critical part is out of stock everywhere today…”  Just keeping established products like the ProtoThrottle available was a daily battle against supply chain problems.    Couple that with my real job at the heart of one of the big shipping companies where every day was a new calamity, and there wasn’t any spare brain power left at the end to work day to contemplate block detectors.

Finally in the summer of 2021, I had some time to start looking at the problem again.  Borrowing a current sense amplifier I’d used successfully on the Motorman (INA180), I arrived at a front end design that didn’t have tolerance issues.  I got the first 10 built and started testing them, and everything looked good.  We went to ramp up to production volumes in late 2021 and…   the wasn’t a single one of those current sense amps anywhere in stock anywhere, and lead times were pushing 9-12 months.  Went from tens of thousands available to none in a couple weeks.

Our options were start over with the design – yet again – or just wait.

It’s hard to run a company like that.  Meanwhile I love the occasional support crank emails I get about “and don’t blame those fake supply chain issues for the delays, it’s just an excuse.”   Okay, Mr. Kookadoodle, you try doing manufacturing in 2020-2023…

Then another supply chain problem kicked me in the rear.  There are no more Raspberry Pi Zero Ws available anywhere, and it’s a critical piece of one of the ProtoThrottle receivers.  Oops, no time to think about block detectors, have to go redesign the wifi-based receiver so we don’t cut off half our sales of our flagship product…

With the receiver crisis being managed and a potentially large customer asking us about BD1s, it was time to turn at least some attention back to block detectors.  Maybe 2 months ago, we lucked into finding a few hundred of the INA180A4.  It was enough to get started again.  We also had our new pick and place machine, which would in theory allow us to produce them in much greater quantities and cheaper than we could by either shopping them out or hand assembly, like most of the other products.  Like any new piece of industrial machinery, however, there’s a learning curve.  Again, it’s a matter of what’s more important on a given week: mess with learning the machine, or get product assembled that customers are waiting on.  It took us a few months and we’re still learning, but I’m happy to say that the Neoden 4 is turning out to be a valuable tool and not a troublesome project.

Now all we needed was some snazzy branding.  CKT-BD1 doesn’t just roll off the tongue.  The TrainSpotter name had done wonders for the CKT-IRSENSE in terms of folks recognizing it, so we wanted to do something similar with the BD1.   Our initial thought was to build on the TrainSpotter name, but we soon realized that we had enough issues explaining to folks the differences between IR and current detection.  We needed something new and unique.  However, everything we came up with turned out to already be taken (or something very close was taken) by a competitor. Finally Michael suggested the ATOM, with a little bit of backronym-ing to come up with “Advanced Train Occupancy Monitor”.  Then Scott piped in with the little track atom logo, and it was a go.  The ATOM it is.

If you’re curious how it works or just want to see what we changed between revisions, the ATOM is Open Source hardware and software like most ISE products.  Full schematics and source code can be found over at Github.